Migration has always featured prominently in Haiti’s history. At times forced; as in the case of sociopolitical repression and the aftermath of disasters, induced to fulfil labour and workforce needs in the Caribbean (Cuba, Panama, the Dominican Republic, among others), and, in other periods, voluntary. Over the past several decades, migration in Haiti has evolved from a survival strategy for individual migrants and their families to now buttressing the economy through the transfer of remittances. This reality was made evident during the 2010 earthquake rebuilding effort when the Haitian diaspora identified itself as Haiti’s “single largest donor” citing “the magnitude of its remittances to the Haitian Republic and how those contributions totalling [USD] $2 billion dollars annually allot[ed] for 30% of the GNP...”.

Remittance transfers to Haiti have continued to grow over the past decade, the lion’s share of funds originating in countries throughout the Americas, particularly the United States, where the majority of Haitians have settled. Yet, the global economic crisis brought on by the COVID-19 pandemic poses a serious threat to the global remittance economy. For Haiti, any substantial reduction in remittances will further weaken an already feeble economy while negatively impacting the livelihood and health of families and communities.

Even prior to Haiti’s official independence from France in 1804, forced migration characterized the colony. The extinction of the indigenous population under harsh labour conditions would facilitate the Trans-Atlantic slave trade between Europe, Africa and the Americas. During the war for independence many Creoles fled the island, some with their slaves in tow. However, it was in the mid-20th century that migration would become a prominent feature of Haitian society. In the late 1950s and 1960s the economic elite were either exiled or escaped the Francois Duvalier regime. The 1960s and 1970s saw an exodus of members of the professional class, followed by the urban and rural poor looking to escape political persecution or seeking economic opportunities abroad.

By 2015, 1.2 million Haitians were living outside of the country, at least half of whom had settled in the US. Between 2010 and 2019, approximately 500,000 Haitians had migrated to countries in Latin America. This, despite the fact that migration in the Latin America and Caribbean region has steadily declined, by almost 3 percentage points, over the past three decades. The vast majority of Haitian migration to Latin American countries has been to Brazil, followed by Chile where they represent the third largest migrant population.

For many developing countries, migration helps the poor and vulnerable remain afloat through remittance transfers. Migrant transfers cover school tuition, food purchases, medical expenses and, in the best of circumstances, support local investments in land, real estate and businesses. The LAC region disproportionately relies upon these resources as “Central America and the Caribbean are among the most income dependent regions on remittances”. In 2015, remittances to Haiti represented one-quarter of GDP rising to more than one-third (36.2%) of GDP in 2019. Remittances have helped the working poor and impoverished Haitian families purchase food, pay school fees, as well as cover other basic expenses. Yet, in the wake of the global pandemic these transfers have started to decline. Remittance data in March 2020 showed an 18% decline when compared with the same month in 2019. Further impacting the remittance economy is reduced service due to limited access to local currencies and the possible rise in transfer costs as service providers face new operational challenges brought on by the pandemic.

The vulnerability of Haitian migrants and their families in Haiti

With the majority of Haiti’s remittances coming from the US, Haiti feels the ripple effects of economic shocks suffered there. Prior to the pandemic, many migrants in the US lived on the margins. More than one-third (35%) earned less than USD $20,000 per year, one-fifth of migrants were uninsured, and that number rises to 32% for the undocumented. It is anticipated that as many as 595,000 migrants in the US will become unemployed as a result of the COVID-19 pandemic. Such vulnerability suggests that the migrant population in the US faces two risks: that of unemployment or increased exposure to infection with limited access to medical care or the financial means to seek it out.

As a triple minority (Black, immigrant and linguistic), Haitian migrants in the US are in no way immune to, and in many respects disproportionately affected by, these risks. Further, they must contend with the demands placed on them by vulnerable family members in Haiti. Haiti has continuously faced years of protracted political crises, the most recent crisis the result of delayed elections culminating in rule by Presidential decree between 2012 and 2016. In October 2016, Haiti suffered its most devastating disaster, Hurricane Matthew, since the 2010 earthquake. In less than two decades, disasters - both natural and manmade - have exacerbated the country’s fragility affecting 5.5 million, with more than 235,000 lives lost to flooding, mudslides, hurricanes, the earthquake or the United Nations introduced cholera epidemic.

Socioeconomic and political conditions in Haiti exacerbate vulnerability making COVID-19’s public health crisis a recipe for yet another disaster. In 2013, access to quality healthcare services for the urban population was 57% and an abysmal 8% for the rural population. That same year, only 60% of Haitians had access to improved water sources and half (30%) had access to improved sanitation facilities. A national survey of critical health facilities in Haiti has reported only 124 ICU beds in the country with a capacity to ventilate 62 patients nationally within ICUs and six patients outside of them. And, HIV prevalence varies from 1.5% to 2.7%, depending on the region.

In 2019, 2.6 million Haitians were food insecure. Stunting affected 4% of children under the age of five and 10% of children under five were underweight. Further threatening the health and increasing the suffering of poor families was the forecasted rise in the cost of staple foods that has now come to fruition.

In this context, any decrease in remittance transfers poses an immediate threat to the health and well-being of many Haitian families. As of May 11, 2020, there were 1,311 suspected cases, 219 confirmed cases of infection and 15 COVID-19 related deaths in Haiti. Arguably, these numbers are more reflective of Haiti’s limited testing capacity than actual infection and mortality rates. What these data elucidate is that any reduction of remittance transfers to Haiti will deliver a significant blow to its beleaguered economy. More importantly, as remittances have long served as the de facto social safety net of the Haitian population these losses will ultimately cost lives. 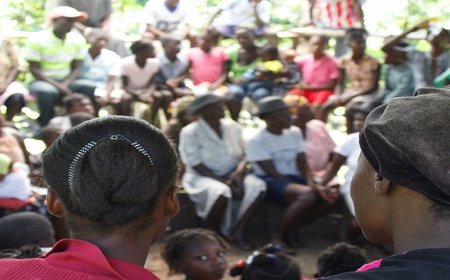