One of the key research objectives of the MIDEQ Nepal-Malaysia Corridor is to find out how Nepali migrant workers make decisions to come to Malaysia. In my interviews so far, I have found that the role of recruitment agencies in their decision-making is quite prominent. While helping to fulfil their dreams of a better life for themselves and their families, what they often encounter in Malaysia are also hellish experiences which they have to endure.

Perceptions of Malaysia as a country of destination

To the question of ‘Why did you decide to come to Malaysia?’, the usual responses I receive reflect the perception of Malaysia as a land of opportunity. First, there is a heavy demand for Nepali labour, but there are other reasons cited. Many recruitment agencies recommend Malaysia as opposed to the Gulf countries, where wages are higher, and point to the differences in climate – primarily that Malaysia has more favourable weather and is not as hot and dry as the Gulf countries. Getting a work visa in Malaysia is allegedly easier, as there is no need for fluency in English.

Moreover, potential Nepali migrants are advised that the recruitment fees charged in Malaysia are relatively affordable compared to the UAE. For instance, Nepali migrants are told that they will have to fork out only between 100,000–150,000 Nepalese Rupees (GBP 656- 983) for their air tickets, visas and travel arrangements.

However, once they are in Malaysia, the realities migrants encounter are often quite different from what has been portrayed to them earlier. One Nepali migrant worker, whom I shall call “Ramesh”, shared that he paid 100,000 Nepalese Rupees (GBP 656) for a plane ticket and a work visa for a job in Cameron Highlands. When he arrived at the Malaysian airport, he had to wait for a couple of hours to be processed. During that time, he witnessed a few immigration officers kicking other migrant workers. That was the first hint of what his life was going to be like in Malaysia.

Ramesh worked in a vegetable farm for a salary of RM1,500 per month (GBP279 per month). He lived in a wooden bunkhouse room measuring 100 square feet with five other occupants. The bunkhouse was not connected to electricity or the main water supply. Their employer also did not provide any meals, nor were there any cooking facilities available. The restrooms were between 10-15-minutes’ walk from their bunkhouse. Because Ramesh and his friends did not want to risk being bitten by snakes, especially at night, they had to relieve themselves in various spots near the bunkhouse.

Their employer expected them to work quickly and efficiently, regardless of how exhausted they were feeling. They had to work for long hours with very little toilet breaks allowed.

Ramesh barely had a social life during his time in Cameron Highlands. There were limited opportunities and nearby places to venture outside the farm with the meagre leftover income available to him. His social circle was confined to the people he worked and lived with. Fortunately, he got along well with his “kind” fellow co-workers.

Ramesh uses Facebook Messenger and IMO (In My Opinion) to stay in touch with his family. Recently, he was laid off because of the economic downturn and lockdown caused by COVID-19. Before, he used to remit about two-thirds of his salary to his family every month. Now, his family gets nothing while he survives on his quickly dwindling savings. He is looking forward to returning to his home country once the international travel restrictions are lifted. His working and living experiences in Malaysia have left a bitter taste in his mouth. He does not intend to return.

Despite this, Nepali migrants are left with limited options

International migration leaves the Nepali migrants with the stress of having to adjust in a foreign country like Malaysia while the families are left behind with the stress of not knowing the situation of the migrant. The main reasons for migration are the lack of sufficient job opportunities in the place of origin, food insecurity, the desire to improve their livelihood situation, better earning opportunities, to gain respect in the village, and a lack of interest in studying or working in the village. The trade-offs involved and the negative social costs of migration include migrants experiencing loneliness, having to endure unfair living and working conditions, the risk of family breakdown and psychosocial stress.

Many migrant workers in Malaysia are exposed to humiliating and even inhumane treatment that goes unreported and unpunished. The responsible individuals range from immigration officers, the police, recruitment agencies, and their employers.

Yet migrant workers dream of bettering the lives of their families through the valuable remittances they send from the host countries – countries which seek their valuable labour. Because of this opportunity, migrants from Nepal endure these abuses. Sadly, for them, it is better not to bite the hand that feeds them and their families. 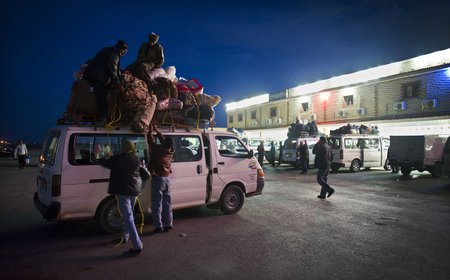