I speak often and with fondness of my elders for grounding my approach to learning, but I only started to realise that they were also my teachers quite late on. A huge inequality existed between my view of them and of my teachers at school, and later at university. Because of the status that society assigned them, I greatly underappreciated the value of grandparents and the worth of their stories, proverbs, anecdotes, songs, rituals and general lifestyle. The funny thing is that one of their favourite sayings was kudzidza hakuperi (learning is never ending), and they were therefore always encouraging me to approach every situation with the humility of one always in anticipation of learning.

As we contemplate and attempt to tackle the inequalities of our time through our work with MIDEQ, it requires a certain effort of ‘humble letting go’ in order to share our expertise — a humble letting go of things that may limit our openness to see the unlikely or unexpected. The anecdote of the ruwaré seems fitting.

The ruwaré, in Shona, is a rockface, and any traveller who finds themselves here, not least one who is also migrating, finds no tracks or visible path to follow. Unlikely or even ‘unreliable’ qualities, such as intuition, now sharply increase in value. The ruwaré is daunting, even for the most experienced wayfarer, but it also has the potential to take each one of us off our sure footing onto unsettled yet more fertile ground for our growth

Starting something new is often accompanied by a sense of anxiety. The writer is confronted by the blank page; the painter, an empty easel; the choreographer, an empty stage; the composer, with silence. This blank space is akin to the ruwaré. It is an opportunity to go on a learning adventure.

The words of my elders were simple, and yet offer so much. I utilise them in applying the creative arts as a language of research and a method of investigating ideas and themes. What the concept of the ruwaré offers us in MIDEQ is something even more tangible than a corridor — something less attached to modernist architecture and more attached to the natural world and its features upon which we move and dwell as human beings.

Perhaps this alternative language of learning, and noticing idioms which feature in our environments, is one that can assist our collective attempts to better understand the world. What I term the ‘acknowledgement inequality’ i.e. the lack of acknowledgement of other ways of knowing, other epistemologies, is vital in developing our anticipation of learning in south-south and unequal contexts.

Just like the millions of those migrating across the global south dealing with uncertainty, risk and unfamiliarity, researchers are in a similar place of ponder. Perhaps we could start by meeting linguistically, intellectually, culturally, artistically and intentionally at the ruwaré — where we might greet each other there, saying ‘hekani pa ruwaré’.

Is there a similar concept in your own traditions? What would be your word for a ruwaré? In Scots Gaelic it is bealach. How did such places look like when you reached them? And how have your learned to meet them well, and cross them safely and with respect? The ruwaré knows you are there, do you? 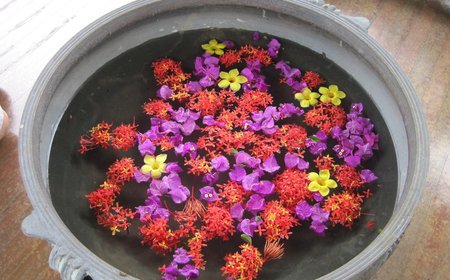