This blog explores the major transformations happening in funerary practices of the Hadiya, an ethnic community found in Ethiopia’s southern highlands. Many young men from the Hadiya and their neighbouring ethnic group, the Kambatta migrate, predominantly to South Africa. This South-South migration has been going on since the early 2000s. This blog is based on fieldwork undertaken in December 2020 and March 2021, and a brief review of the literature.

Transformations in funerary practices in Africa

Socio-cultural practices, including funerary practices, in Africa went through major changes in recent centuries. Under the pressure of diverse forms of ‘modernisation projects’ often dichotomously understood from ‘tradition’—inter alia, colonialism, monotheist religions, urbanization and mobility, technologies, diseases, and education—funeral practices showed ‘momentous’ and “in some cases radical” transformations in Africa.

Transnational impacts of migration and the presence of a large stock of migrants on funerary practices became more noticeable in recent decades. Migrants send bodies to be buried back home and sponsor funeral ceremonies, while pictures (still or moving) are sent back as well. In addition to being funerals sites of ‘intense exchange and resource redistribution,’ funerals provide opportunities for migrants to further reify their subjective attachment to the homeland. This blog explores these changes within the context of a not as easily malleable and mouldable socio-cultural phenomena, but rather as deep seated cultural processes which one could assume to be more ‘static’ and explain continuities. It does so through an examination of changes in funeral practices among the Hadiya, where migration to South Africa is common.

Traditional funeral practices among the Hadiya

Traditionally, the Hadiya handled funerals with great emotion and care, by performing rituals centred on establishing spiritual links with the ancestors. Funerals were viewed as an occasion to cooperate and help a fellow member of the community cope with the experienced loss. The village social organisation (seera) is responsible to relieving the bereaved from the burden of attending to the various tasks. The seera leader coordinates members, following stereotypical gender roles: women bring cooked food (traditional bread, boiled wheat; women could also do the cooking at site), while men collect firewood and fetch water from the nearest surface water source. Men also contribute their labour in erecting the tent and digging the burial ground. Another social organisation, Iddirra, also formed based on principles of co-residence, is responsible for monetary and equipment support during such occasions. Given the high cost of ‘exit’ from such associations and ostracism, village members actively cooperate and collaborate when death strikes a member’s house.

In the past, funeral practices were essentially the same for most houses, from the food and water served to the labour contributed. Funerals were not viewed as occasions to consume or mark one’s status. Food was primarily served to those ‘constantly sitting at the funeral home’ and ‘those who came from far places.’ It was only the funeral of noble individuals which brought larger number of attendees and required further preparation such as preparing large amounts of food.

Funerals as sites of social competition

The long-running funerary practices of the Hadiya are now making rapid and seismic changes under the influence of economic incentives from South Africa. What used to be an occasion for all community members to share and contribute towards is being transformed into an occasion for conspicuous consumption. What used to be a mark of nobility—large attendance and consumption during funerals—is now replaced by the readily available money the bereaved could muster to dispense within a short notice. Funerals are no longer occasions for symbolic representation of communalism to shoulder the loss and economic challenges related to funerary practices. Instead they serve as a better indicator of one’s economic status. As one informant stressed: “Funerals are better indicators of wealth and social status than weddings, as the latter’s date could be better planned and invitees are known, while death sneaks into your house unexpectedly.”

Funerals in Hadiya have now developed into large consumption events, as various informants stressed. It is now common to slaughter an oxen (or more), buy tens of thousands of half litre bottled water to be distributed to attendees, and fresh food will be cooked at site. The labour contribution is now minimal as firewood is purchased and burial grounds are dug by hired labourers. The amount and quality of food prepared (primarily ox (costing 800-1,000 USD) slaughtered) and bottled water (0.125 USD per bottle) bought and distributed, and for how long this continues, depends on the financial capacity of the family of the deceased. Moreover, it is now trendy to have expensive tombstones (costing more than 2,000 USD) made of marble or ceramics erected. An inauguration ceremony will also be prepared, often accompanying killing of an ox and distribution of bottled water.

As is obvious, only the wealthy can afford to spend on such lavish funeral ceremonies, while others mortgage or sell property to meet such expenses. The total expenses are hundreds of thousands of Birr (100,000 Birr roughly makes 2,500 USD in current exchange rates). Estimates for medium to lavish funeral ceremony costs are about 4,000 USD, while more expensive ones could cost much more than this. Given the generalised poverty in Ethiopia and the low per capita income, such expenses are only a dream to the majority of the Hadiya (and other Ethiopians). Based on current public service salary rates, 4,000 USD is about two years’ salary of an average civil servant in Ethiopia. As such, the pressure on the poor and non-migrant households are starkly obvious.

While a few rich individuals living in Ethiopia can afford to do this, the majority of such expenses are made based on money and orders of children/relatives in South Africa. These emerging funeral practices constitute a major expression of the widening gap between migrant and non-migrant families at the worst time in a family’s life.

Cultural impacts with a centre on social organisations

One could assume that the voluntary risk-sharing co-residence based social organisations, seera and Iddirra, could help the poor weather the pressures of conspicuously visible inequality generated by migration, more specifically remittances. However, these cultural institutions are not insulated neither.

The monthly monetary contributions made in Iddirras has now increased, in many cases, to between 150 and 200 Birr (3.5 to 4 USD), and an additional annual contribution of about 2,000 Birr (close to 40 USD). In return, Iddirras provide up to 2,500 USD when a member dies. These figures are much larger than is the case in wealthy neighbourhoods of Addis Ababa. Comparing the monthly contributions to entry level civil service salaries in the national system gives a good contrast: these contributions could make some 10% of the net monthly salary of an entry level civil servant.

The monthly contributions and support one gets in times of a certain bereavement from an Iddirra could be peanuts to migrants’ families. That partly explains the proliferation of Iddirras in towns, while in the past there used to be only one per town/village. Following the experience of larger multi-ethnic cities, it is now becoming common for co-residents of neighbourhoods in Hadiya to have different work- or ethnic/clan-based associations.

Migrants’ families also benefit from Iddirras established in South Africa. In the event that a migrant’s family member dies, the migrant will be entitled to a large sum of money (as much as half a million Birr, 7,500 USD), a good portion of which is sent to the family to cover expenses. It is thus common for migrants to give orders on the quality of funeral ceremony they want, and in return have pictures sent to them.

If the deceased is a migrant, the Hadiya community come out en masse to see off the body. They arrange for the body to be sent, and make contributions towards meeting expenses of the funeral service by his family. If the deceased is a bachelor and without an immediate heir in South Africa, his businesses and property will be sold and the money remitted.

Moreover, in times of revision of associations’ bylaws wealthier members and migrants’ families influence intra-association debates, specifically when it comes to the monthly contributions. Worse, the various labour contributions that used to be made through associations are no longer expected. There is monetisation of the labour required to dig burial grounds and prepare food, further increasing the burden the poor bear during such critical times.

Migration and new ‘cultures of consumption’

As indicated above, remittances and the accompanying monetization of important cultural aspects of life is creating new markers of wealth and social status. Funerary practices are now important markers of status. Given this, funerals have become strong indicators of the widening inequality among the Hadiya. The poor are losing the increasingly consumption-oriented changes in funerary practices, while migrant families comfortably meet the high costs. As such, migration is bringing new ‘cultures of consumption’ to the disadvantage of the poor and non-migrant families. 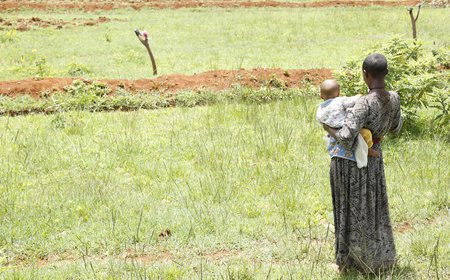 Child migration from Hadiya, Ethiopia is highly gendered, which impacts who migrates and where. These gendered migration patterns reinforce repressive traditional gender norms in the area, undercutting advances in gender equality.
Read more 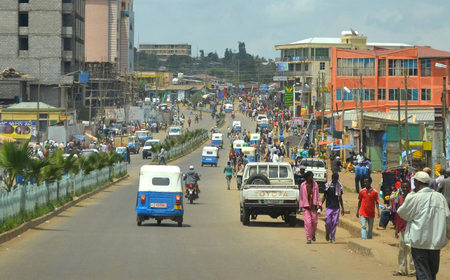 The impact of the pandemic on migrants’ country of origin is uneven, and major migrant-sending regions are more adversely affected. This is most obvious in the sharp decline in remittance flows. In South Africa, most of the Ethiopian migrants have settled and work in urban and rural black townships and engage in the informal retail sector – which is more affected by the travel restrictions than other parts of the economy.
Read more 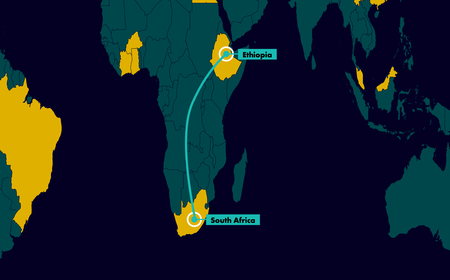