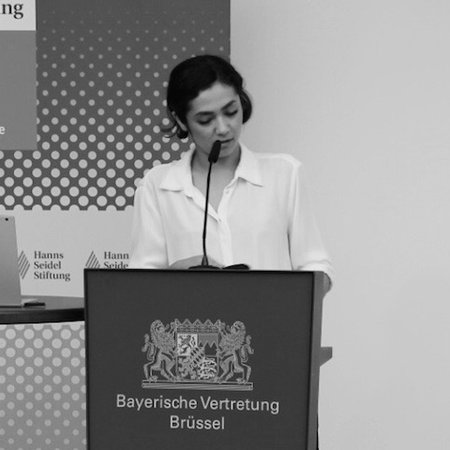 Hadil Dayri is a researcher, MS graduate in Negotiation and Conflict Resolution from Columbia University. Her work has previously focused on intractable conflicts, local dispute resolution, socio-political trends in the MENA, institution building, transitional justice and on fostering community resilience in the Arab world and the Sahel. She holds a BSc in Politics and Philosophy from the London School of Economics (focus Middle East and Philosophy of Public Policy). Through her master’s, she produced a Participatory Action Research project, which used complexity science and dynamical-systems mapping to identify avenues for improvement in basic-needs interventions and local capacity-building in Benghazi, Libya. She initiated a participatory research exercise to address concerns for basic-needs and human security amidst vulnerable communities in Benghazi (IDPs and youth).

She has previously interned at the UNHCR's Syrian Refugees unit in Cairo, co-founded a non-profit app aimed at the integration of vulnerable refugees and migrants into the labor market in London, and most recently consulted for the Konrad-Adenauer Foundation's Regional Program South-Mediterranean in Tunis, as part of the Libya desk, focusing on subjects relating to economic development, local governance, security and migration issues.

She has also worked in the field of education in London, in a school for special needs, teaching children with mental disabilities, and as a social worker in Cape Town, focusing on the psychosocial health of disadvantaged youth. She is fully proficient in French, English and Arabic, with basic knowledge of German.